Neuropathic pain, also known as nerve pain or neuralgia, occurs when there is damage to the nerves; it is one of the major consequences of spinal cord injury. In this study based in Spain, 10 patients received a dose of 100 million bone marrow MSCs, repeated at 4 months and 7 months. No adverse events were reported during the 10-month follow-up period. 9 out of 10 of patients reported relief in neuropathic pain. Their mean pain scores significantly decreased from 5.50 to 1.50, as measured by standard pain scales. This shows that MSC therapy (particularly in repeated doses) is a safe and potentially beneficial treatment option for spinal cord injury patients suffering from neuralgia.

Neuropathic pain (NP) is highly disabling, responds poorly to pharmacological treatment, and represents a significant cause of decreased quality of life in patients suffering from spinal cord injury (SCI). In recent years, cell therapy with autologous mesenchymal stromal cells (MSCs) has been considered as a potential therapeutic weapon in this entity. Ten patients suffering chronic SCI received 100 million MSCs into subarachnoid space by lumbar puncture (month 1 of the study) and this procedure was repeated at months 4 and 7 until reaching a total doses of 300 million MSCs. Intensity of NP was measured by standard numerical rating scale (VAS) from 0 to 10, recording scores previous to the first MSCs administration and monthly, until month 10 of follow-up. Months 1, 4, 7 and 10 of the study were selected as time points in order to a statistical analysis by the nonparametric Wilcoxon rank test. Our results showed significant and progressive improvement in NP intensity after the first administration of MSCs (p: 0.003). This study supports the benefit of intrathecal administration of autologous MSCs for the treatment of NP in patients with SCI.

Opioids are commonly prescribed to millions of patients for chronic pain. While they bring pain relief, they are associated with opioid tolerance (OT) – the body grows used to opioid medication and requires higher doses to manage pain adequately. Another condition associated with opioid use is opioid-induced hyperalgesia (OIH), where the patient grows even more sensitive to pain. Neuroinflammation has been shown to play a central role in OT and OIH, so the anti-inflammatory, neuroregenerative and neuroprotective properties of MSC position them as an interesting treatment option.

Hua and colleagues have recently shown that OT and OIH were significantly reversed after bone marrow MSC transplantation in rats and mice receiving opioids. The results, a joint collaboration from centers in Ohio, Illinois and China, were published in Nature Scientific Reports. Following MSC administration, the development of OT was significantly attenuated and reversed in the rodents, with a peak at 12 days after start of treatment. Additionally, morphine sensitivity was significantly and consistently lowered, and pain thresholds were reduced to the baseline. OIH development was also significantly prevented. Microglia activation and BDNF release (key in the development of tolerance) were attenuated, and IBA-1 positive cells in microglia were restored to their resting state. These results are encouraging news for OT and OIH treatment research with MSC.

More than 240 million opioid prescriptions are dispensed annually to treat pain in the US. The use of opioids is commonly associated with opioid tolerance (OT) and opioid-induced hyperalgesia (OIH), which limit efficacy and compromise safety. The dearth of effective way to prevent or treat OT and OIH is a major medical challenge. We hypothesized that mesenchymal stem cells (MSCs) attenuate OT and OIH in rats and mice based on the understanding that MSCs possess remarkable anti-inflammatory properties and that both OT and chronic pain are associated with neuroinflammation in the spinal cord. We found that the development of OT and OIH was effectively prevented by either intravenous or intrathecal MSC transplantation (MSC-TP), which was performed before morphine treatment. Remarkably, established OT and OIH were significantly reversed by either intravenous or intrathecal MSCs when cells were transplanted after repeated morphine injections. The animals did not show any abnormality in vital organs or functions. Immunohistochemistry revealed that the treatments significantly reduced activation level of microglia and astrocytes in the spinal cord. We have thus demonstrated that MSC-TP promises to be a potentially safe and effective way to prevent and reverse two of the major problems of opioid therapy.

Primary and lasting benefits in pregnancy.

Observations made on over 300 consecutive obstetrical cases using supplemental ascorbic acid, by mouth, convinced me that failure to use this agent in sufficient amounts in pregnancy borders on malpractice. The lowest amount of ascorbic acid used was 4 grams and the highest amount 15 grams each day. (Remember the rat-no stress manufactures equivalent “C” up to 4 grams and with stress up to 15.2 grams). Requirements were roughly 4 grams first trimester, 6 grams second trimester and 10 grams third trimester. Approximately 20 percent required 15 grams, each day, during last trimester. Eighty percent of this series received a booster injection of 10 grams, intravenously, on admission to the hospital. Hemoglobin levels were much easier to maintain. Leg cramps were less than three percent and always was associated with “getting out” of Vitamin C tablets. Striae gravidarum was seldom encountered and when it was present there existed an associated problem of too much eating and too little walking. The capacity of the skin to resist the pressure of an expanding uterus will also vary in different individuals. Labor was shorter and less painful. There were no postpartum hemorrhages. The perineum was found to be remarkably elastic and episiotomy was performed electively. Healing was always by first intention and even after 15 and 20 years following the last child the firmness of the perineum is found to be similar to that of a primigravida in those who have continued their daily supplemental vitamin C. No patient required catheterization. No toxic manifestations were demonstrated in this series. There was no cardiac stress even though 22 patients of the series had rheumatic hearts. One patient in particular was carried through two pregnancies without complications. She had been warned by her previous obstetrician that a second pregnancy would terminate with a maternal death. She received no ascorbic acid with her first pregnancy. This lady has been back teaching school for the past 10 years. She still takes 10 grams of ascorbic acid daily. Infants born under massive ascorbic acid therapy were all robust. Not a single case required resuscitation. We experienced no feeding problems. The Fultz quadruplets were in this series. They took milk nourishment on the second day. These babies were started on 50 mg ascorbic acid the first day and, of course, this was increased as time went on. Our only nursery equipment was one hospital bed, an old, used single unit hot plate and an equally old 10 quart kettle. Humidity and ascorbic acid tells this story. They are the only quadruplets that have survived in southeastern United States. Another case of which I am justly proud is one in which we delivered 10 children to one couple. All are healthy and good looking. There were no miscarriages. All are living and well. They are frequently referred to as the vitamin C kids, in fact all of the babies from this series were called “Vitamin C Babies” by the nursing personnel–they were distinctly different.

While updating my database of human clinical trials using expanded human umbilical cord mesenchymal cells I came across a new article (April, 2016) describing a 36-month safety in subjects given intravenous cells for in a type 2 diabetes study. The study, a phase I/II, 36‑month, randomized controlled trial was conducted in patients diagnosed with T2DM according to the criteria outlined by the American Diabetes Association and performed at Qingdao University by Dr. Jianxia Hu et. al. 1 Not only were there no adverse events in the treatment group of 31 subjects but there were significant improvements in blood sugar control and decreased diabetes-related complications.

Two intravenous infusions of expanded human umbilical cord mesenchymal stem cells were given four weeks apart. The dose of each infusion was based on the weight of the subjects and averaged 60 million cells.

Significant improvements were seen in post-prandial glucose and hemoglobin A-1C levels but not fasting glucose. 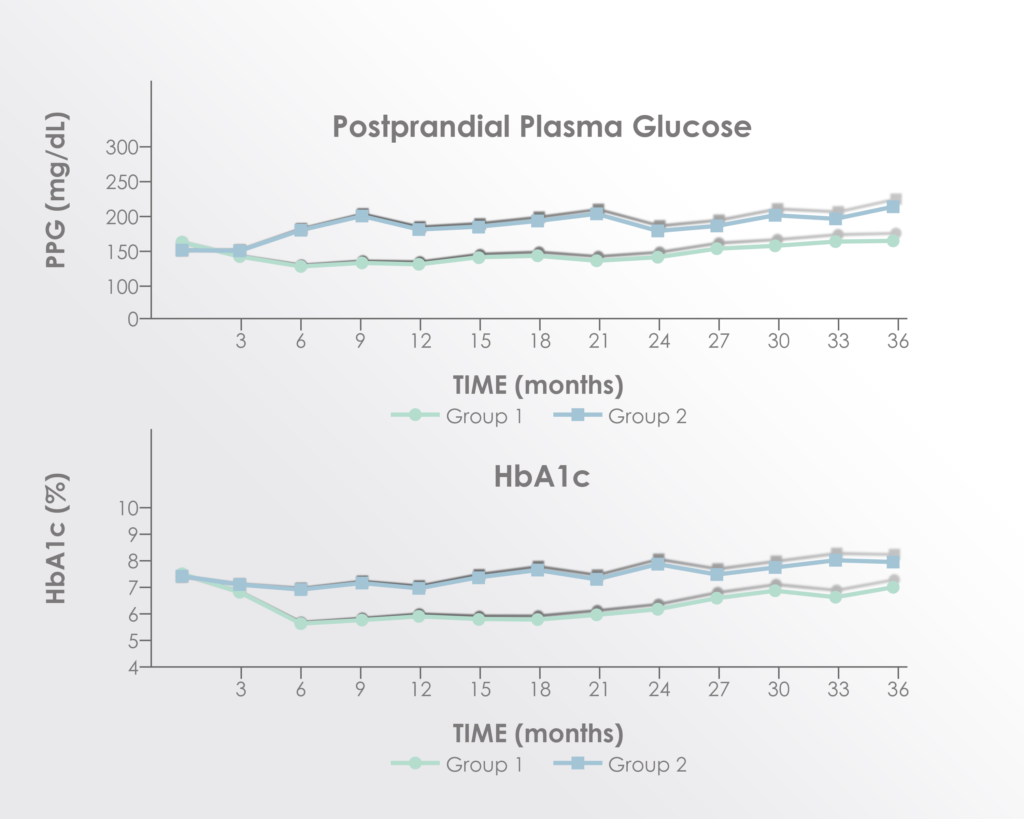 C-peptide (surrogate for endogenous insulin production) and C-peptide to glucose ratio were both significantly improved in the treatment group. 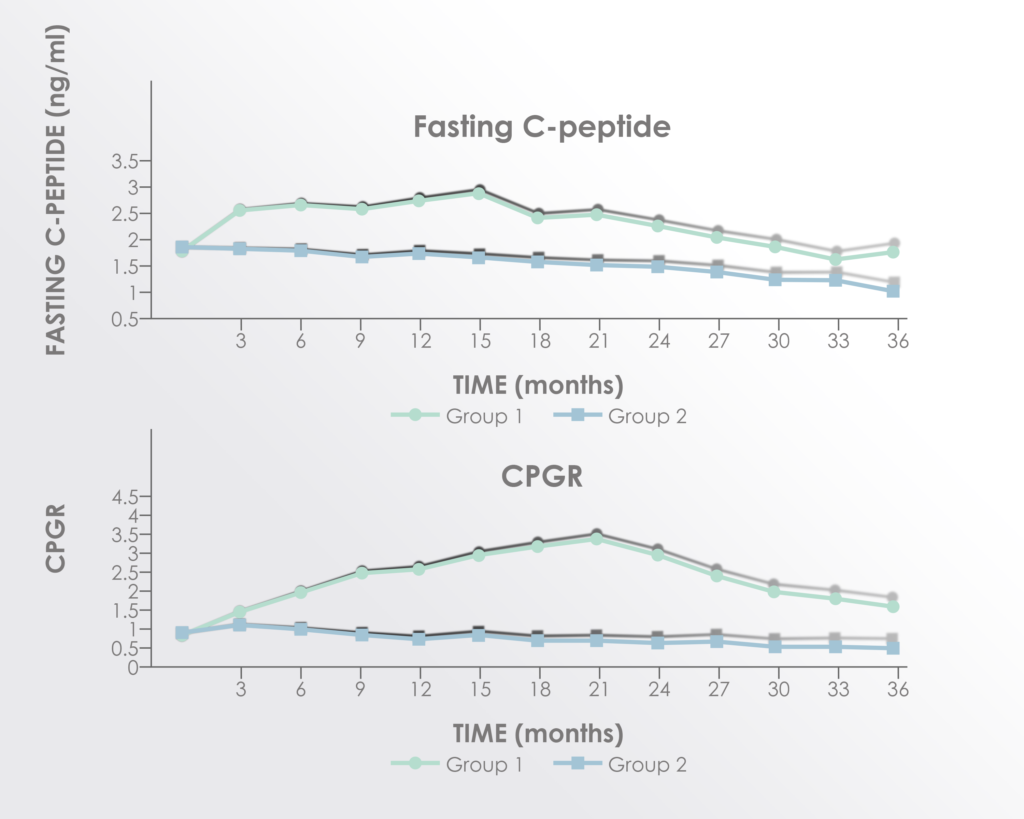 The improvements seemed to peak between 15 and 21 months after treatment supporting a rationale for re-treatment before 15 months.

Duchenne Muscular Dystrophy (DMD) is a degenerative genetic disorder that affects the muscles in the body in a progressive manner, leading to eventual death. Mesenchymal stem cells (MSC) are able to reach the affected muscle cells and to start tissue regeneration and repair, making them an attractive treatment option for DMD. This study by Pelatti et al. demonstrates the safety of MSC to treat Golden Retriever Muscular Dystrophy – an animal disorder with remarkable similarities to human dystrophy. The treatment was well-tolerated and no long-term adverse effects were reported.

The possibility to treat Duchenne muscular dystrophy (DMD), a lethal X-linked disorder, through cell therapy with mesenchymal stromal cells (MSCs) has been widely investigated in different animal models. However, some crucial questions need to be addressed before starting human therapeutic trials, particularly regarding its use for genetic disorders. How safe is the procedure? Are there any side effects following mesenchymal stem cell transplantation? To address these questions for DMD the best model is the golden retriever muscular dystrophy dog (GRMD), which is the closest model to the human condition displaying a much longer lifespan than other models. Here we report the follow-up of 5 GRMD dogs, which were repeatedly transplanted with human adipose-derived mesenchymal stromal cells (hASC), derived from different donors. Xenogeneic cell transplantation, which was done without immunosuppression, was well tolerated in all animals with no apparent long-term adverse effect. In the present study, we show that repeated heterologous stem-cell injection is a safe procedure, which is fundamental before starting human clinical trials.

Treatment with human umbilical cord mesenchymal stem cells is shown to be effective in controlling hypertension and reducing the infiltration of inflammatory cells in the placenta, in this preeclampsia rat model.

CONCLUSION: In summary, HU-MSC transplantation may be extremely beneficial for PE therapy.